← more from
Afar
Get fresh music recommendations delivered to your inbox every Friday. 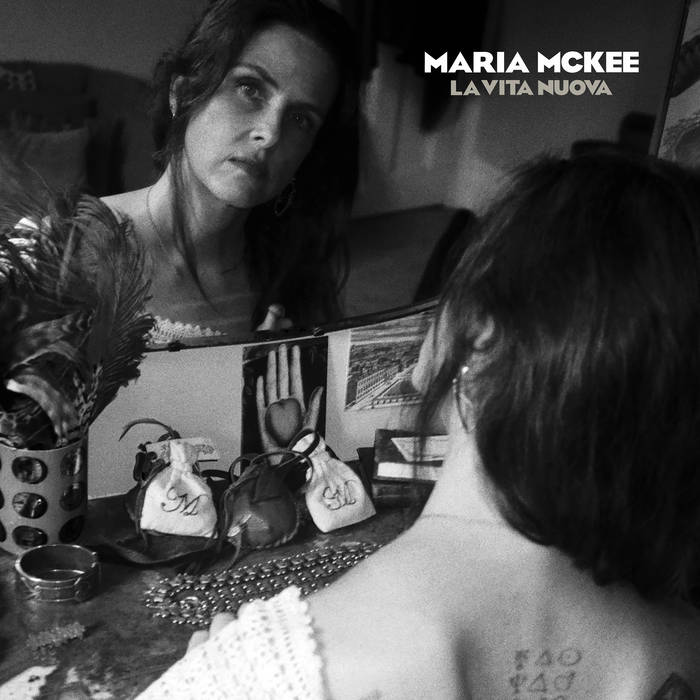 bluekros Love her work and voice since the 80s. Nothing has changed. I´m still in love. A fantastic new album. Every song. With a great matured voice. Can´t stop listen. Thank you Maria Favorite track: Right Down To The Heart Of London.

eric Today all i've done is stand in the middle of my room happily screaming the chorus to "la vita nuova" at the top of my lungs. I've wept to "Courage" and "I Should Have Looked Away". Everything is goosebumps and joy and release and comfort. Thank you. I will never shutup about how great it is to experience this album. Favorite track: Courage.

theaustinsplaylist wonderful to have new music from you

jaredgalczynskifanaccount The best and only full length album I've ever had from Maria Favorite track: Page Of Cups.

Ardent, anglophilic, anachronistic, luddite/maximalist and baroque, ‘La Vita Nuova’ was written as an elegy to desire. Upon its completion, it became a conjuring.

Candid and passionate, Maria McKee has quite simply, had a beatific awakening and in a crescendo of prose, her new album ‘La Vita Nuova’ unlocks this story, sketching out a momentous and transformative time in her life that started decades ago when she sang in her living room by the fire with her older brother, the late, great musical innovator Bryan MacLean, co-founder, (along with Arthur Lee), of the seminal LA band LOVE. Along the way she retooled punk and country as the lead singer of pioneering Americana band Lone Justice, released a string of evocative and eclectic solo records, wrote chart-topping hits and inspired the devotion of a loyal cultish fan base before seemingly disappearing… It’s been thirteen years since her last studio album ‘Late December’ which was released in 2007.

‘La Vita Nuova’ is an homage to Dante’s opus on unrequited love. Though the unconscious impetus for making this album was to process the shock of one of McKee’s most prodigious personal challenges thus far, the dissolution and reinvention of her marriage, the songs are progressive and lyrically dense. The production is orchestral and operatic and takes it cues from McKee’s lexicon of icons - John Cale, Scott Walker and David Bowie. And so, it’s a conversation that demands a level of deep concentration. One may need to listen more than once to connect with the confessional narrative that is held in subtext and to understand that within the lines of prose the “muse”, or “Beatrice” of the album is also a heart-breaking phantom of McKee’s younger, idealistic self. And a metaphor for youth in general. As reflected in the haunting, cascading melodic strains of the Joni Mitchell hinted “I Should Have Looked Away” and the poignant, nostalgic wistfulness of lead track “Effigy of Salt”.

McKee has also since moved to London. The album seems to herald this move as there are nods to Sandy Denny, Kate Bush and English composers and poets McKee admires such as Ralph Vaughn Williams, Keats and Swinburne whose work she had immersed herself in while writing the album. McKee’s professed Spiritual Father, William Blake is name checked on the track ‘Right Down To The Heart of London’, a love letter to the psychogeography of McKee’s expatriate home.

‘Ceann Bró’ was inspired by the astral projected liaisons between William Butler Yeats and Maud Gonne on the westernmost point of Ireland as McKee is an initiate of an occult lodge in the tradition of Yeats’ and Gonne’s The Hermetic Order of The Golden Dawn. The lyrics in ‘Page Of Cups’ flirt with the “unexpected, surprising muse” figure in the minor Tarot arcana. The track recalls ‘Forever Changes’-era Love as does ‘I Just Want To Know That You’re Alright’. Both are heavily influenced by brother Bryan MacLean.

It would be easy to believe that ‘La Vita Nuova’ indeed could have been “channelled” as McKee eludes to the songs descending “like manna from the throne” in the lyrics for ‘Courage’. The nineteen-piece orchestral arrangements were composed and arranged by McKee who has had no formal classical training and doesn’t read a note of music. But really that is the nature of creative catharsis which generally operates with a will of its own.

Bandcamp Daily  your guide to the world of Bandcamp

Little Brother joins the show to discuss their beautiful journey, plus tunes from Fat Tony